Writer, journalist, radio and television reporter, Jacques Chancel was born in Bigorre, French Pyrenees.
In Indo-China, at seventeen, he has been the youngest war correspondent ever. From 1950 to 1958, he travelled the whole Asiatic South-East and completed his studies between Saigon and Peking.
In 1968, after running a newspaper (L’heure de Paris, Paris-Jour), he created his first radio programme (“Radioscopie”), the prelude of many others (among which “Figures de Proue”).
During twenty years, he has presented 6800 radio broadcasts.
When he created with Marcel Jullian in 1975 the French second channel (Antenne 2), he invented a new style of television.
Later on, with Hervé Bourges, he took part in the birth of the France-Televisions group. When head of the third channel (France 3), he widely promoted the French regions. He has presented for three decades “Le Grand Échiquier”, a famous musical TV broadcast, and “Ligne de Mire”.
After being in charge of the “Idée Fixe” collection for French publisher Julliard, he created in 1993 a journal called Les Écrits de l’Image. 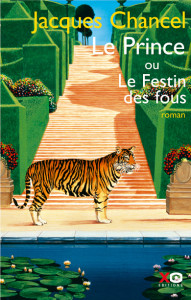 An adventure story and a philosophical tale with which Jacques Chancel takes us into a fabulous and baroque universe. Four men get in a pub. Each one has received a plane ticket for Saigon. They ...