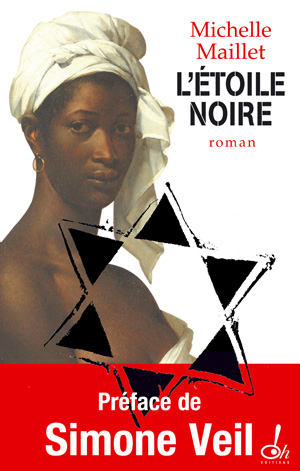 1943. A roundup. Sidonie and her two twin children are arrested : they are Black and will be sent to a concentration camp.

To fight against loneliness, pain and madness, Sidonie is dipping into her Martiniquese roots. She calls upon the memory of her African ancestors, slaves and rebels, which survived centuries of oppression. The God for slaves, Agenor, is giving her strength and courage. In the concentration camp — the reign of horror —, the magnificence of the French West Indies, to which Sidonie is clinging, is ever so striking. She, who has never felt herself as a slave, is fighting as strong as she can to retain her dignity and humanity.

Michelle Maillet is dealing with the tough subject of the Black people sent to concentration camps during WWII. Almost an unknown subject. Twenty years ago, she found out some pages from the diary written by a Martiniquese woman who once was a prisoner in Ravensbrück. This diary deeply touched her West Indian identity, touched her conscious and sensibility.

Praise for The Black Star

“Michelle Maillet, by deciding to write The Black Star and to let the Black and West-Indian Sidonie suffer the hell that has been our own, teaches a great lesson of intelligence, for which we all have to be grateful.”
Simone Veil,
President of the Foundation for the Shoah Remembrance
Former President of the European Parliament

“This testimony made into a novel is a very unique one: it is both harrowing and poetic and commends love and tolerance. Thanks to The Black Star, Sidonie won’t get lost in the mists of time.”
Jeune Afrique

“What is telling Michelle Maillet is that nazism, on top of an exterminating machine, is the killing of any sensation, the murder of any colour and smell, an attempt to crush any dream for good.”
Catherine David, Le Nouvel Observateur

“Black Slavery has been for a long time ignored and overshadowed by Occidental memory and mass unconscious. Nazism was the biggest atrocity of the 20th century, along with the Apartheid.

I wanted to deal with all these atrocities by the means of a sensitive novel, both strong and tender, a unique novel, because I had the feeling that any other kind of written work could be perceived as a trick.

That I had to write a novel was an obvious fact. Only a novel would allow me to let my characters speak, with their own words, choosing the “fantastic” as a contrapuntal element to the horrible experiences they were passing through..

I chose to write a novel to bear witness, to pay a tribute to all the people sent to concentration camps who will vanish soon. I didn’t want them to be forgotten.

I didn’t want nazism to remain the killing of any sensation, the murder of any colour and smell, an attempt to crush any dream for good.

A woman who was sent to a camp once told me : “I experienced all that you wrote : the air, the smell, the stinking, the feelings… how did you make it to live here and in hell at once?”

Above all, The Black Star brought me a deeper faith, a wider compassion for human beings, a sharper sense of the immense pain that any man can carry with him or inherit, a tenderness and a true love deprived of any racism for my fellow men and women.

When confronted to such an insanity, you have to stay humble. But there is no generosity without a rebellion. I know by now that there is no use in anything as long as the man’s ill heart is not healed by a constant vigilance, by respect, tolerance, sweetness, humility, understanding, love.

But how to learn respecting each other, loving each other to live together? This is a topical question whose answer lies within each of us. If our freedom is all we possess, how do we use it, what do we subordinate it to?

The answer is up to you!

A flower has grown on the humus of this disrupted, crushed, obliterated humanity. This flower, a fragrant, evergreen, rare and unique one, is what I am giving to you, readers.”