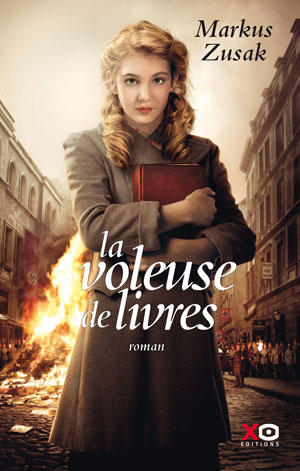 IT IS IN 1939. NAZI GERMANY. THE COUNTRY IS HOLDING ITS BREATH. DEATH HAS NEVER BEEN BUSIER, AND WILL BECOME BUSIER STILL.

Liesel Meminger and her younger brother are being taken by thei mother to libe with a goster family outside Munich.

Lisel’s father was taken away on the breath of a single, unfamiliar word – Kommunist – and Liesel sess the fear of a similar fate in her mother’s eyes. On the journey, Death visits the young boy, and notices Liesel. I twill be the first of many near encounters. By her brother’s graveside, Liesel’s life is changed when she picks up a signle object, partially hidden in the snow.

It is the Gravedigger’s handdbook, left there by accident, and itis herfirst act of book thievery.

So bezgins a love affair with books and words, as Liesel, with the helpof her accordion-playing foster father, learns to read. Soon she is stealing books from Nazi-burnings, the mayor’s wife’s library, wherever there are books to be found.

Buth these are dangerous times. When Liesel’s foster family hides a Jewish fist-fighter in their basement, Liesel’s world is both opened up, and closed down.

The Book Thief is a story about the power of words to make worlds. In superbly crafted writing that burns with intensity, award-winning author Markus Zusak has given us one of the most enduring stories of our time.

In The Book Thief Death says repeatedly that this is only the story of a girl. But at its deepest level, do you feel that one of the key themes of the story is the way that human love and kindness, however fleeting, have a kind of permanent power over death?

I concentrated mostly on the idea that humans have great beauty and great “ugly” (as Death puts it) in them, and we all struggle to steer ourselves, hopefully, towards the beauty. I guess the old saying is true that death is what makes life worthwhile. Knowing that we are not here forever makes us appreciate things, and it’s often those fleeting kindnesses and loves that define us in the end.

In America they are marketing The Book Thief as a young adult book. Do you think that there is a clear distinction between YA or A fiction?

My take on this is that at home, I have hundreds of books on my shelf. There are many categories, plus one. At the top of that shelf, are my favourite books – the books that I’ve loved, and that’s the type of book I’m trying to write when I sit down and work. For that reason, the categories of YA versus Adult fiction become irrelevant. Nobody ever says, “I loved your YA science fiction comedy” to someone. They simply say, “I loved your book”, and that’s what I’m aiming for.

Do you worry that younger teens might find the book too disturbing?

To be honest, not really. Whether it’s the era the book deals with or using Death as narrator, I think there’s a positive thread that runs all the way through the book – it’s the gems of kindness and love that you mentioned earlier that sit amongst the darkness that are special – but they wouldn’t be special without the darkness as a backdrop.

Is being a success in the US market a different thing from being successful in Australia?

It’s been quite a shock. In America, everything is just bigger. There seems to be more money, more publicity, purely on account of the mass of population. I was consistently awestruck while I was up there. It’s a real shock to the system at times.

Talk to me about your character Death. Clearly he is the mythological grim reaper who belongs very much in the world of Nazi Germany, but is your character someone else as well?

I wanted Death to be both removed and yet made-up of us, as humans. He speaks in a way that is just left of us, referring to – clouds who stood close by – and so on. I wanted Death to be part of the elements, treating the sky, the clouds, the trees as colleagues. I also wanted him to be vulnerable. After all, he has a lot to do and he sees humans at their worst. Once I had him afraid of humans, I knew I had the tone right – it made him unexpected and I liked the irony of him being afraid of humans, since we’re so afraid of death.

Tell me about Max’s book, The Standover Man. Like Liesel’s The Book Thief, it’s a book within a book, but it ultimately disappears. Did The Standover Man take shape as a separate work? Were there difficulties associated with it?

I wrote and rewrote the text of The Standover Man a good dozen or so times. I didn’t want it to be too polished, as it was from the point of view of someone who is not a writer. Then I had Trudy White do the illustrations, and we edited further. Originally it was 20 pages, but we cut it down to twelve or thirteen. I also cut many of the words, to let the pictures do the talking.

One of the most important elements was having Mein Kampf bleed through the pages as Max used an old copy of the Fuhrer’s book to paint over and create his own story. It was an idea I had early on, and then Trudy had the same thought later onâ€¦It just helps the idea of the power of words and also the idea that we all have the power to rewrite the ugly with some beauty.

How did Max’s illustrations come about? Did you work them up first, or simply hand the text over to your illustrator Trudy White?

There was never any intention for me to do the final pictures. I did some of the early drafts, but they were abominable. I knew that I had Trudy up my sleeve, but I wanted to show her and give my publishers an idea of what I wanted. It was Trudy’s idea completely to draw Max as a bird, which was perfect, as I had described him as having feathers of hair and he was really a captive bird in a basement of Nazi Germany.

What about the comedic elements in the book? Is the notion of Death as comedian one that came naturally to you?

Death’s sense of humour is there as his protection. My feeling is that he uses it to distance himself as much as he can. The problem for him in this case is that Lieselâ€™s story keeps reeling him in.

Liesel loves Max because she understands that they have something in common (nightmares/persecution/survivor guilt), and that these similarities between us cut deeper than labels about culture or religion. Though in some ways it is other people’s labels/words for us like “Jew” or “Communist” that help shape our own self-perception. Talk to me about these dichotomies in the book.

I never set out to discuss the use of labels in society. If it’s something to be found in the book, I’m happy! I’ve always thought that if a writer creates something strong enough, people will find things in the book that the author may not have realised until much later. For me, there are definite labels. Max, of course, is a Jew. He is also Liesel’s friend. He is many things, and maybe these things circle the label. He would not have known Liesel if were not Jewish. He could not have created those artworks in the basement. But he also wouldn’t have been persecuted. Maybe our labels are a result of fate, but they also send us towards other places, both good and bad.

There’s a really big chronological gap and geographical jump between the ending of Liesel’s story and the ending of the book. Did you ever think of doing the book any other way, filling in Liesel’s gaps or somehow making a story of her move from Germany to Sydney? Do you think you will you ever revisit that entirely different but related story?

I was never completely sure that the book would end in Sydney, but once I did know, I was sure that I would let people imagine the sixty-odd years that stood between Liesel in Germany and Liesel in Sydney. I have considered writing a book about Liesel coming to Australia, but I doubt I will write it. The Book Thief is so precious to me, and I would have to stumble across something pretty special to make me risk ruining the memory of Liesel with a sequel.

What’s next? Are you playing with a concept or an idea for your next book or project that you are able to talk about?

I am in the early planning stages of something new. It’s a book about a boy who becomes a great bridge builder. I’ve actually had the idea for about ten years now, and the time has finally come to write it. I always thought that all of my other books were leading to this one. Then The Book Thief came along and changed everything. I gave The Book Thief everything. It’s the best I can do. Now I worry whether I can do it again, but there’s only one way to find out. 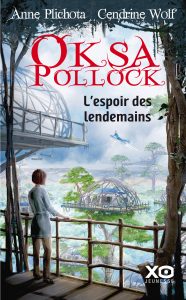 The much awaited return of Oksa Pollock In this new volume in the series, we find our heroine, 10 years later, dealing with the vicissitudes of power, facing the conservative old guard and the ... 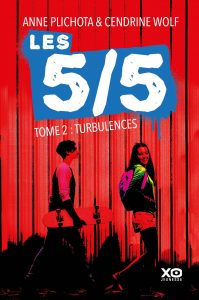 For the 5/5 the time of unrest has arrived… In the dismal heat of summer, the bonds between the street sport aficionados Titus, Far, Merlin, Tom and John have become stronger as they have gotten ... 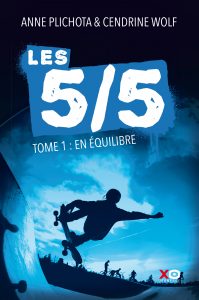 When five teenagers unite against injustice. Far is 16 years old, she is a gifted young woman torn between two cultures. Merlin and Titus, twins, have dropped out of school. They are 17 and ... 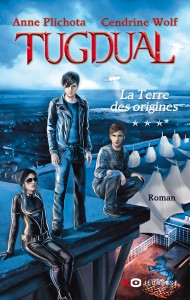 This time, Tugdual, Zoé and Mortimer are going to use all their powers to annihilate the Conquerors. The challenge? To save humanity…a thrilling finale. Underground at the Denver airport, the ... 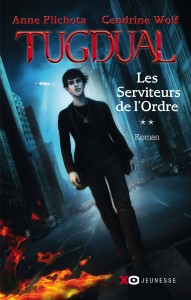 Volume 2 : Servants of the Order

The worse thing that could happen to them is to fall in love. A thrilling second volume of the Tugdual series, a new creation from the authors of Oksa Pollock. On each page a dark and unexpected ...

Volume 2 : Servants of the Order 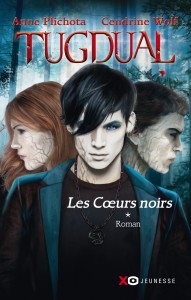 Just shy of 18, Tudgual’s family is not exactly like other families. Like him, they all have magical powers. Abakum, his grandfather, Mortimer, his 17-year-old brother and Zoe, his 16-year-old ... 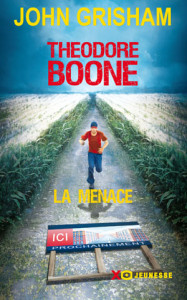 Theodore Boone trapped in the web of unscrupulous politicians In the quiet county of Strattenburg, citizens are troubled by the news of the construction of a new highway. Theo’s middle ... 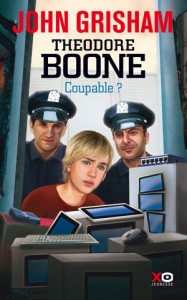 Theodore Boone wanted by the police? While all of Strattenburg anxiously awaits the trial of the odious Pete Duffy, who has been accused of murder, our young lawyer’s apprentice keeps ... 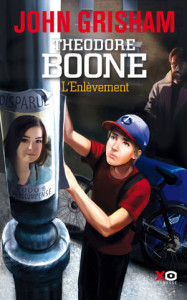