“Friends, please help… Tonight, at three o’clock in the morning, a woman died of cold. She died clutching the piece of paper she had been given two days ago, informing her that she was being thrown out…” This appeal, launched by the Abbé Pierre on February 1st ,1954, mobilized many people in France. This was the start of the uprising of kindness and the foundation of Emmaüs. Since then the Abbé Pierre has been the public figure best loved by the French.

February 1st, 1954 – February 1st, 2004 : fifty years later, the Emmaüs movement is launching another appeal – a prick of memory to (re)mobilize the French against poverty. The Manifesto against poverty, written by the President of Emmaüs France, Martin Hirsch, together with Jérôme Cordelier, presents a horrifying picture of poverty today.

Just buying the Manifesto against poverty is already a gesture that helps, since all royalties and profits, in their entirety, will go to Emmaüs. But to read it is to risk wanting to become more involved. It is a book that spurs to action and touches a chord. A week after its publication, five thousand people had already contacted Emmaüs to volunteer a little of their time and suggest ideas.

“This “action” book is part of a plan to awaken consciences.”
Le Figaro 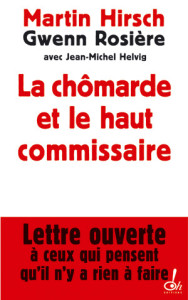 The High Commissioner and The Unumployed

« Dear Martin Hirsh, finding your letter in my letterbox gave me great pleasure. I accept your offer to continue this exchange, especially since I find the idea of corresponding with you highly ...

The High Commissioner and The Unumployed