See you soon!, are the last words that Michel Serrault wanted to leave us with, and which he asked to see inscribed on his book. The rest of the text is merely an interpretation of…the text.

« More than ten years ago now, I had the good fortune to meet Michel Serrault, and to become his publisher. Since then, two books have been published, and we had begun discussing this new text. Michel Serrault wanted to look back on the sixty years of his career, tell us about all his most pleasing, moving memories, but also to reap the product of his experience : he wanted to pass on what he had learnt while working, as a final gift. As was his habit, he took particular care in choosing the words with which to express all this, even the title, See you soon !, a last provocation.

Michel Serrault was wary above all of anything too serious, but he was, at the same time, conscious of the tragic aspects of life. It made his public persona secretive and whimsical, the thoughtful actor, and the man as modest as he was generous. He often feared seriousness, weightiness, or even grief, and so indulged himself in one of those extravagances of his that had the advantage of rendering the moment poetic. Something excessive, unbelievable would then appear, which distorted reality, to send it reeling towards comedy most of the time, or sometimes towards a worrying bizarreness.

Michel Serrault worked for two years on See you soon ! With his family, we have seriously debated the question of whether or not to go ahead with the publishing of this book. We finally decided to proceed as planned, and publish it as it was at the last reading. And thus, here is his last book, manifold and swarming as he intended it, a reflection of his life. ». 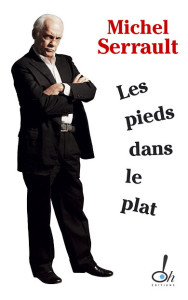