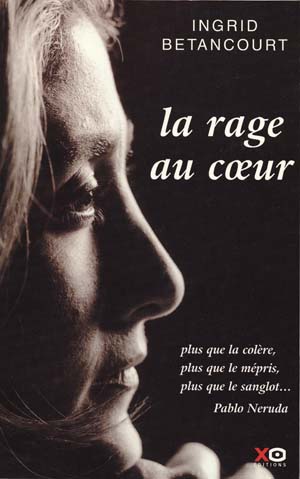 Until Death Do Us Part

INGRID BETANCOURT HAS JUST BEEN FREED!

Her memoirs, “Until Death Do Us Part” (original title: La Rage au coeur), has been published by XO in 2001.

This woman is a heroine. In this book, she recounts her battle against the drug cartels and the corruption of the leaders in her country, Colombia. Ingrid Betancourt has been a hostage of a Colombian armed revolutionary group, the FARC, for 4 years and has just been freed.

While living a carefree and comfortable life, she became aware of the ravages caused by the drug cartels and the corruption of the leaders in her country. Consequently she left everything, and involved herself in politics. Her simple words holding great promise on honesty, work, and courage, are convincing. She was elected deputy, then senator with exceptional electoral results.

It is dangerous to denounce the dishonest among the powerful in Columbia. Since the municipal elections in 2000, hundreds of candidates have been abducted and assassinated. Ingrid Betancourt knows that at any moment she could die at the hand of a hired killer. She has already escaped from one assassination attempt, she has received at her home the photo of a child’s mutilated body accompanied by a letter directed to her own children. But this woman is a flame of hope for her country. Her unconditional commitment against corruption, her strength, her faith in the future, could reverse the cynicism and the violence that have poisoned her country. Ingrid Betancourt is a heroine. If she succeeds, she will have changed the course of history.