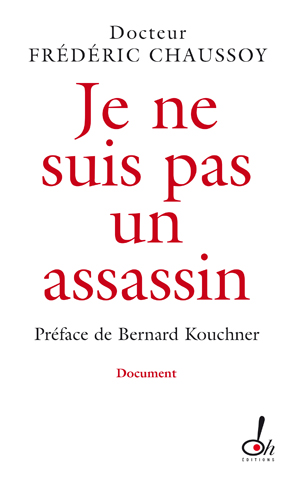 I am not a murderer

“Defying laws and social habits, a mother brought to his suffering and incurably ill son the death he was longing for. This extreme and modern tragedy, overwhelmed the whole country, stamped on our time, provoked a social debate and a change in our laws. With an accurate tone, Doctor Chaussoy tells how, fighting down his own doubts, he committed, after Marie Humbert, the ultimate and liberating act.
Human paths depend on the risks you face. In a morning of September 2003, medical resuscitator Fredéric Chaussoy decided to put an end to the sufferings of Vincent Humbert, a 22 year old paralytic locked up in his body-coffin. It was a huge shock for all of us and, suddenly, political debates seemed very insipid. Without the doctor knowing it, a law about the end of life was herafter imposed in France .
A book that will deeply affect you”

I am not a murderer is a deeply moving book, written by a deeply human author. An important plea for an eventually chosen death.

Praise for I am not a murderer:

“Doctor Chaussoy, with this deeply moving book asks the main questions about our human lives. A most disturbing and moving testimony, a human book.” La Croix du Midi

“A book that will deeply affect you.” L’Indépendant