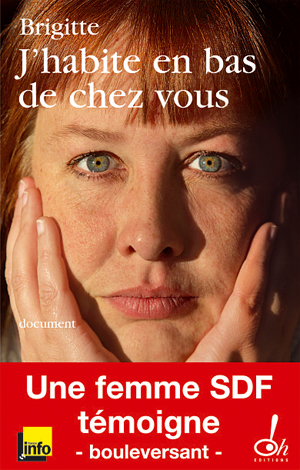 I live on your doorstep

« I’m speaking from experience, you can have valid papers, a job, a family, friends, and still have to sleep outside. »

An exceptional testimonial: for the first time, a homeless woman tells her tale

She left a man who was beating her, only to find herself living on the street, where she stayed for two whole years
Victim of a man, victim of the street
She tells us her story to change the way we see homeless people

At the age of 42, Brigitte is out on the street, avoiding the deadly blows of a man. She had a normal life up till then, but now she has to run away. She doesn’t realise it yet, but she has just become a homeless person.

For two years, she lives outside, with no shelter, and the street becomes her territory. She comes face to face with hunger, contempt, the cold, fear and the ever present violence…

It is so much worse for a woman to be out on the street. Yet more than one out of three homeless people are women.

Brigitte witnesses the spiralling down into depression of her companions, sometimes turning to alcohol or to drugs, she sees them disappear because they move neighbourhoods, or they die…

She holds on. Survives. Says no. The street life toughens her, yet weakens her at the same time. For two long years, she is both helped out and rejected. It will take immesurable strength for her to get out of this.

Brigitte’s story is deeply moving, because it shows us what we choose to ignore : that Brigitte is just like us. She says herself that out on the street, « there are a lot of normal people whose lives just collapsed around them ».

Today, thanks to the help of an association, she lives in a flat. She has found a job working with children. A dream of hers which she never gave up on.

This book was written in collaboration with Veronique Mougin, a journalist, who writes for Femmes Actuelles, L’Express and Psychologies Magazine.

In the European Union:

“What she says first is that she is happy. Happy with a small flat in the suburbs of Paris and her job as a nanny. But some signs of the past in the street remains in her eyes. She wanted to bring her testimony in a book which is poignant”
Elle