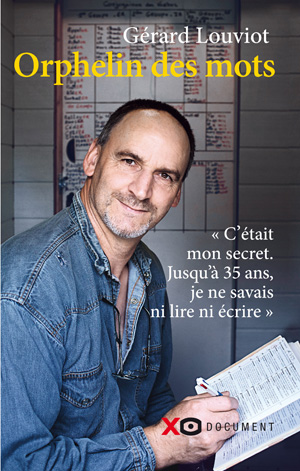 Everything is a constant struggle: finding your way, being resourceful, getting around and putting up with mockery and humiliation. For the first time a book speaks of this disgrace that forces, in France, close to 3 million illiterate people to live on the outskirts of society.

He was raised in Brittany, in a foster family. As a child Gerard was unable to remember his lessons and couldn’t learn to read. Paralyzed by shame, he experienced the humiliation of wearing the dunce cap in the classroom.

As an adult, his life became an obstacle course: taking a train, signing a form, reading an instruction manual – everything was impossible for him, and on top of this invisible handicap, the fear of being exposed as illiterate was added. Only the songs of Renaud, his idol, helped him hold on.

At 35 he was a factory worker when he finally decided to confess to his boss: “I can’t read”. Moved by this man’s suffering, the entrepreneur gives him the opportunity to take classes. It was more than a liberation, it was a rebirth.

Today, at 46, Gerard continues his reading and writing classes. He devours the dictionary, posts the conjugation tables on the walls and writes poems for his wife and his children.