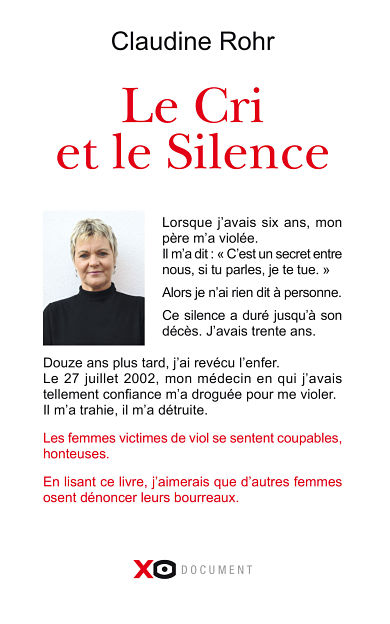 The story of a life nearly destroyed but saved by the will to fight.

Claudine Rohr was raped two times. The first time was by her father. The second time, it was the doctor she confided in, years later. She bravely decided to break the silence to encourage women to dare to speak out against their perpetrators.

Statistics about rape reflect only the tip of the iceberg of the actual number of rapes committed throughout the world. It remains an extremely taboo subject. Contrary to many crimes, rape is one in which the victim feels guilty. This feeling of shame acts like a muzzle, letting many crimes go unpunished.

Claudine Rohr survived, in spite of it all. She shares her story with us: her father, who smothered his child to keep her from screaming. Years later, she still hasn’t let out a single scream, only a whisper to her family doctor about what happened to her as a child and about her fear of men. He listens and tells her he understands. Just before he drugs her and rapes her in the privacy of his office.