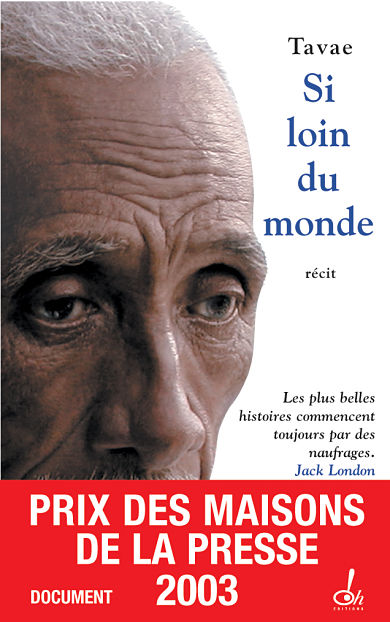 So Far from the World

On April 15th, 2002, Tavae cast off from Papeete for an ordinary day at sea. Soon afterwards his engine failed, and then his radio. He found himself alone on the open sea with only a few litres of water and his daily food ration.

It was 118 days before Tavae reached land. He had lost 21 kilos and was immediately hospitalised. He had drifted for 4 months, covering over 1 200 kilometres. The winds and currents took him frome Tahiti to the Cook Islands.

So Far from the World is much more than the testimony of a survivor. Tavae the fisherman is a master of the sea, a “Tahua”. He displays humility before the power of the elements and grace when faced with their beauty. This account was written in collaboration with Lionel Duroy. His writing, limpid and evocative, creates an original voice: the voice of a lost fisherman, by turns confident and despairing, rebelling and clinging to his faith, but always profoundly human.

So Far from the World is a literary work suffused with poetry and meditation.

“An Odyssey of the will.”
Paris-Match

“A beautiful lesson in hope and the human will, magnificently recounted by the writer Lionel Duroy.”
L’Express

“A piece of testimony about survival.”
France Soir

“An extraordinary lesson in courage and tenacity, but also in humility in the face of the elements. It also paints a striking picture of the end of a civilisation (…) wiped out by the irruption of the modern world.”
Métro

“An unbelievable adventure; it takes us back into a time when sailors were still discovering the world.”
Bateaux