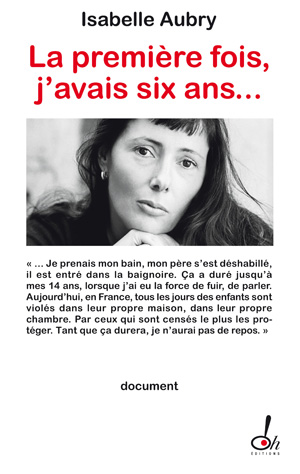 The First time, I Was Six …

Every year in France, thousands of children are sexually abused. Three times out of four, it is within their own families.

Almost every time, both the child and the people around keep quiet. Isabelle Aubry is herself a victim of this ruling silence, and she tells the ordeal she went through in this deeply moving account of her wrecked childhood.

“I left my childhood, my stability, my health, my studies, in my father’s bed. Many children today endure the nightmare I had to live through. These live dolls, abused by their grand-father, uncle, father, mother, these slaves that are raped under the roof of their own home, are much more in number than you realise. It is for them that I decided to tell my story: how, despite everything, despite incest, I became a human being. Fragile, but standing.”

Strength of character, courage and determination are what helped Isabelle Aubry build herself back again, slowly but surely. Today, she is a wife and a mother, and an unparalleled fighter. Through the international Association for victims of incest, which she has created, she fights so that each victim will manage to survive, so that each of their torturers will be found guilty.