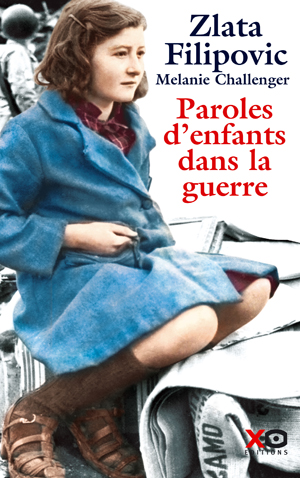 A collection of particularly powerful, emotional testimonials of children in the war from 1914 to 2004, among which Zlata’s own, an internationally acclaimed journal, that became a bestseller worldwide.

War, such a horrible thing, seems thankfully to go on far away from us. This is what we all want to believe, and what Zlata, at 11, believed, before a terrible conflict erupted in her country, and transformed her little girl’s diary into a war journal.

Zlata is 25 years old today. She wanted to meet other young people who, like her, had began confiding in a journal when faced with war. For two years, Zlata and Melanie searched, read, perused many an archive, dating back across the duration of the twentieth century, originating everywhere across the globe, before choosing a dozen texts, most of them unpublished as yet, and never before uncovered. The emotions found in these pages are intense, poignant. From 1914 to 2004, each of these journals is enough in itself to show the world the horrors of war. But bringing them all together displays even more brutally its pointless atrocities. Despite the difference in the location and origins of each conflict, the reactions, the suffering, the strength of these children, allies or enemies, at the heart of war, remains the same. Each account filled with feelings of rebellion, with sentimentality, enthusiasm, impetuosity, ardour, a perverse attraction or revulsion towards death…

All are equal when faced with the violence of war. The impotence of men before the rising voices of these children becomes an unacceptable renunciation.